Endometriosis occurs when cells similar to those that line the uterus are found in other parts of the body, commonly a woman's pelvic and reproductive organs.[1] What happens when you have endometriosis, and its causes and symptoms, are discussed.

Endometriosis, pronounced end-o-me-tree-oh-sis (or just endo), is a progressive, chronic condition where cells similar to those that line the uterus (the endometrium) are found in other parts of the body. It most commonly occurs in the pelvis and can affect a woman's reproductive organs. 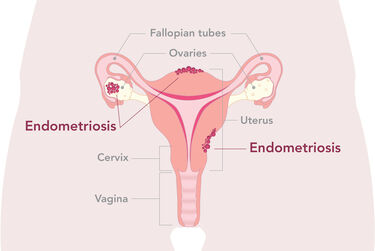 Studies suggest that endometriosis affects 1 in 10 women of reproductive age, with an estimated 176 million women worldwide having the condition.

Endometrial cells found outside the uterus grow to form lesions or patches that bleed and leak fluid in response to your hormones at the time of the period. This leads to inflammation and scarring. These patches found outside the uterus cannot pass out of your body and remain in your pelvic cavity, on organs and other surfaces. On your ovaries, cysts called endometriomas can develop over time. These are sometimes called 'chocolate cysts' because of the darkish material they contain. On other surfaces the patches can form nodules.

We don't really know what causes endometriosis, and possible associations or factors can be different from woman to woman. Factors that have a role in causing endometriosis include:

Other possible factors that may have a role in causing endometriosis are:

In this video, Jean Hailes gynaecologist Dr Elizabeth Farrell gives a brief overview of the symptoms, management and treatment options for endometriosis.

Can I prevent endometriosis?

Endometriosis can't be prevented but is less likely to develop or progress if a woman reduces the number of menstrual cycles she experiences during her reproductive years. Factors that contribute to fewer menstrual cycles include:

Learn all you need to know about endo.

There may be different forms of endometriosis

How do you know if you have endometriosis?

About three out of four women with endometriosis have pelvic pain and/or painful periods.

Symptoms can be extremely variable and may present with mild pain with periods or may be severe right from the outset of menstruation (menarche). For some women, there can be a slow and steady progression of symptoms (common); for others, symptoms may progress rapidly and affect multiple areas of the body and include non-gynaecological symptoms (less common).

Hithaishi had to convince doctors she wasn't drug seeking or had psychological issues before being diagnosed with endo. Watch the video and find out how she did it.

Symptoms you may experience

Pain is a key symptom of this condition. The pain is not related to how severe the disease is, but rather to the location of endometrial tissue.

Usually, endometriosis does go away after menopause. Uncommonly, it can return with the use of menopausal hormone therapy, or MHT (formerly called hormone replacement therapy, or HRT), especially if there is no progestogen component. Even more rarely, it can return for no reason without any hormonal treatment.

When to get help

Get help when period pain is stopping normal daily activities. For example when:

This web page is designed to be informative and educational. It is not intended to provide specific medical advice or replace advice from your health practitioner. The information above is based on current medical knowledge, evidence and practice as at May 2019.