Hear me when I say I’m in pain

Zoe Simmons lives with chronic pain. Beginning in her teenage years, her complaints were dismissed, first by the teachers at school and later by doctors who could not work out what was wrong with her. But her pain is real, and she has now become a voice for women and girls across Australia who struggle with the pain of health conditions like endometriosis, adenomyosis and fibromyalgia.

Growing up, I believed if I was unwell, doctors would help me – but it wasn’t until I became disabled that I realised how far from the truth that belief is.

Ever since I got my first period, my pain has been dismissed.

“It’s just period pain,” everyone assured me, even though it hurt so bad I’d beg my teachers to let me sit out of PE [physical education].

Despite the fact that it felt like people were stabbing me and pouring acid into my abdomen, my teacher told me I was attention-seeking, forcing me to run laps. Doctors were no help – they just put me on The Pill and said my pain was normal, and I believed them.

It wasn’t until about ten years later, in my early 20s, when I broke my wrist and realised my period cramps hurt more than a broken bone. But when you have a uterus, it’s pretty common for your pain to be ignored.

Before long, my agonising abdominal pain began to appear outside of periods, with a host of other symptoms like bone pain, nerve pain, brain fog, nausea, and soul-crushing fatigue that’s so much more than being “a little bit tired” – it’s struggling to function and think.

If I’m being perfectly honest with you, I don’t remember what it’s like to not be in pain anymore.

And yet, despite the severity of my symptoms, I – and many other people living with invisible illnesses – have to constantly battle with our medical system to be heard and cared for.

It’s been five years since I began searching for answers. And during that time, I have seen countless GPs and specialists, many of whom have either dismissed my pain, or refused to investigate it.

I’ve had to beg for every blood test, ultrasound, scan and surgery, because medical professionals seem content with telling me: “we don’t know what’s wrong with you”.

I’ve heard so many excuses, from “more tests will just make you more anxious” to “we don’t need to know what’s happening, your treatment will still be the same”. Just this week, my pelvic MRI request has been rejected, because my last ultrasound didn’t show endometriosis – but isn’t that the point of further testing?

I’m made to feel like a nuisance for speaking out ﻿– but we have to speak out and advocate. Because if we don’t, who will?

It enrages me to know that millions of people experience the exact same gaslighting and diminishing everyday – especially for conditions like endometriosis, adenomyosis, fibromyalgia, and myalgic encephalomyelitis that mainly affect people with a uterus. Conditions that tend to be swept under the rug, with sufferers thrown into the “too hard” basket, because not enough is known about them.

We shouldn’t have to battle to be heard. It shouldn’t be a war to get our symptoms taken seriously.

Our pain might be invisible, but it’s just as valid as any visible disability.

Zoe Simmons is a journalist, copywriter and author who writes to make a difference in the world. Since she lives with mental illness, chronic pain and chronic fatigue, advocacy is a key part of everything she does. Follow her on Instagram, Twitter, Facebook or LinkedIn, or visit her website for more. 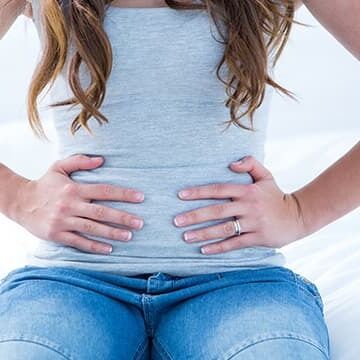 Do you experience chronic pelvic pain?

Learn about the different types of pelvic pain, when to seek help from a doctor, and key advice.

The power in sharing a story

Breaking the mould: one woman’s experience of menopause in the workplace

The power of intuition: one woman’s heart health journey