Fibroids are common non-cancerous growths of muscle that form within the muscular wall of the uterus (womb). Fibroids occur in up to 7 out of 10 women by the time they are aged 50.

Fibroids are common non-cancerous growths of muscle that form within the muscular wall of the uterus (womb). Fibroids occur in up to 7 out of 10 women by the time they are aged 50.

Fibroids (also known as uterine fibromyomas, leiomyomas or myomas) may grow in different layers of the uterus.

Fibroids can be located within the muscle (intramural); other types grow in the outer muscle layer (subserosal) or are inside the cavity of the uterus (submucosal). 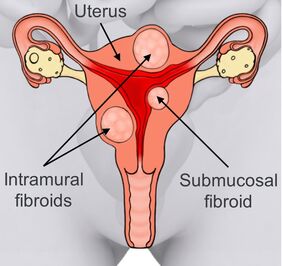 Signs and symptoms of fibroids

Most women have fibroids that don’t cause any symptoms. However, if fibroids cause problems, symptoms will depend on the size, number and location of the fibroids.

These may include the following:

Bleeding in between periods is not common but can sometimes happen. In rare instances, a fibroid may become cancerous and this is called a sarcoma.

It is not known exactly why fibroids occur. However, we do know the female hormones, oestrogen and progesterone play a significant role in stimulating fibroids to grow.

Fibroids grow in women of reproductive age, until menopause. After menopause, they usually shrink and may disappear.

Some factors increase your risk of getting fibroids, while others lower your risk including:

How are fibroids diagnosed?

A diagnosis of fibroids may be made during a vaginal examination, ultrasound or during surgery for other conditions.

The first test recommended is a transvaginal ultrasound, where the ultrasound probe is gently placed in the vagina. This is more accurate than a pelvic ultrasound where the probe is moved over the tummy (abdomen). Other tests may include MRI (magnetic resonance imaging).

Fibroids may be confirmed during a hysteroscopy, which is a procedure performed under local or general anaesthesia. A hysteroscope (a thin telescope) is carefully inserted along the vagina into a woman's uterus to examine the inside cavity.

Fibroids can also be confirmed during laparoscopy (keyhole surgery). This is an examination using a thin telescope, performed under general anaesthesia. Through small cuts in the abdomen, the doctor is able to look at or operate on the pelvic organs, such as the uterus, ovaries and fallopian tubes.

Most fibroids will not require treatment unless they are causing problems such as:

The treatment options can be categorised as medical or surgical. These may be combined depending on your needs, such as:

What are the medical options?

What are the surgical options?

The effect of fibroids on fertility and pregnancy depends on the size and position of the fibroids (not the number of fibroids). In some cases, Caesarean section may be recommended for future births.

Only certain types of fibroids will have an impact on getting pregnant and/or delivery.

Who to see for help

If you are experiencing any of the symptoms of fibroids, see your doctor. Your doctor may refer you to a gynaecologist.

Listen to a podcast

You can hear the full interview here.