Phytoestrogens (plant oestrogens) are substances that occur naturally in plants. They have a similar chemical structure to our own body's oestrogen (one of the main female hormones), and are able to bind to the same receptors that our own oestrogen does.

In a perimenopausal or postmenopausal woman, when her own body's oestrogen is low, phytoestrogens may help ease the symptoms of low oestrogen in about one in three women. This is because about a third of the population has the specific gut bacteria that can metabolise the isoflavones (a type of phytoestrogen) in soy to a more potent phytoestrogen called equol. The amount of isoflavones needed daily to achieve therapeutic effects is contained in about 200g of tofu, or 100g of tempeh.

Why phytoestrogens may be beneficial for women

Some studies have shown potential benefits of phytoestrogens in regard to cardiovascular risk, bone density and menopausal symptoms. About a third of women who eat a diet that delivers amounts of phytoestrogens typical of an Asian diet (particularly from soy foods) find that their menopausal symptoms improve. This is because only about one third (and possibly up to a half) of all people have the specific gut bacteria that converts soy isoflavone (phytoestrogen) diadzien, to the more potent form, equol. 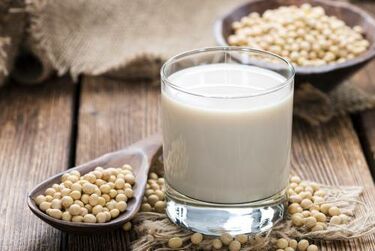 Different types of phytoestrogen include:

Remember, not all soy milks are fortified with calcium. If your brand does not have 120mg of calcium per 100ml or higher, a calcium supplement could be a good idea.

Eating a diet with moderate amounts of whole soy foods such as tofu, soy beans and breads made from soy flour is healthy; but avoid the highly processed soy foods and soy based supplements, as they work differently to soy that is found in nature.

Example of a phytoestrogen menu

This menu gives you ways to incorporate more phytoestrogen-rich foods in your daily meals. While you don't have to become a vegetarian, eating more phytoestrogens means preparing meals based more on plant foods and less on meat and chicken.

There has been much speculation about the risk of breast cancer from phytoestrogens in soy products. This is mainly based on the misconception that because these foods contain oestrogen-like compounds, they might stimulate breast tissue in the same way that our own body's oestrogen or pharmaceutical oestrogen can.

A 2006 review of research on the link between phytoestrogens and breast cancer showed that:

There is conflicting data on the breast cancer risk of individual isoflavones, daidzein and genistein, that are found in soy. For this reason, supplements containing individual soy isoflavones, and soy supplements which have standardised amounts of these constituents should be avoided. Eating whole soy foods is safer.

A 2013 review highlights that studies that show that eating soy decreases the risk of developing breast cancer, are done in Asian rather than Western cultures. This is likely attributed to the greater amount of soy consumed in Asian diets compared to Western diets. In a typical Asian diet, the average daily intake of isoflavones is 25-50mg, whereas in Western diets the amount of soy isoflavones is less than 1mg per day! [3]

The bottom line with eating soy is that eating a diet with the amount of soy isoflavones typical of an Asian diet seems to be protective against breast cancer and it is these amounts that are needed for symptom relief.

How much soy contains 50mg of isoflavones?

This web page is designed to be informative and educational. It is not intended to provide specific medical advice or replace advice from your health practitioner. The information above is based on current medical knowledge, evidence and practice as at February 2014.