Is it time to add the word 'enough' to the top of your ever-growing to-do list?

If you want something done, ask a busy woman.

It's an age-old saying, but in a frantic, fast-paced modern world, it has never been more accurate. For many women, multi-tasking has become a way of life, with barely a moment for self-care or reflection.

It can be an all-consuming juggling act: women are often trying to hold down a career while ferrying kids to school and activities; caring for ageing parents; organising holidays and family celebrations; as well as balancing a budget and staying on top of domestic chores.

Add to that the uniquely modern pressure of digital overload – keeping up with emails, texts and social media notifications – and the mental load for many women has never been greater.

The Jean Hailes annual Women's Health Survey for 2018 revealed that 67% of women reported feeling nervous, anxious or on edge nearly every day or on more than seven days in the previous four weeks. More than 33% of women also reported not getting any time for themselves on a weekly basis.

Over time, the stress of playing the family's chief organiser can take its toll and this sense of mental overload is partly fuelling increasing rates of anxiety and depression.

One in two women in Australia will be diagnosed with mental health problems in their lifetime.

So how can you unpack the mental load? And what can we do as a society to ensure women are not carrying an unfair burden?

"It's really important that we have better education for women about looking after themselves. Often the busy woman is extremely good at juggling work and juggling other people's demands at the expense of herself," says Professor Jayashri Kulkarni AM, director of the Monash Alfred Psychiatry Research Centre and one of Australia's leading experts on women's mental health.

"We need to teach women to think in a more mindful way about what's on their to-do list and to reduce the things that aren't critical. Often women are driven by a need for perfection and that can be a terrible pressure to live under."

It's about learning to be kind to yourself, says Prof Kulkarni. "Instead, the mindfulness approach means being present with what you're doing.

"So if you're there with your child, then be there with the child and actually get enjoyment out of that. It's trying to decrease the sense of anxiety you get by thinking, 'I've got 25 things on a to-do list and I'm only at number two'."

Prof Kulkarni suggests a 30-minute daily "prescription of fun", in which women spend half an hour doing something enjoyable just for themselves.

She says learning to view this time not as narcissistic or selfish, but as a necessary act of recharging, is an important protective factor for mental and physical health.

Gillian Needleman, a clinical psychologist with Jean Hailes, says many women struggle with guilt when they put their own needs first.

"They're feeling like they don't do any one area well and they're just chasing their tails," says Ms Needleman. "They're usually very accomplished, capable people, who have diminished performance because they're just across too many things.

"They're carers, they're nurturers and they're also the strategic planners for the people around them so it's quite a load and they'll neglect their own interests, which has a compounding effect over time because [they] can't keep eroding something without replenishing it."

Our own worst critics

Prof Kulkarni says that, psychologically, women are more likely than men to be self-critical, doubt themselves and ruminate over the mental load they are carrying, which can be energy-consuming and counter-productive.

"Then, of course, there are societal views that women should be youthful and conform to a certain body shape, which is an added burden on women and also places pressure on relationships and intimacy," she says.

While there have been some advances in the push for gender equality, women shoulder a lot of the burden at home.

According to the Australian Bureau of Statistics, women spend more than twice as much time per day on unpaid domestic chores (two hours and 52 minutes compared to men (one hour and 37 minutes).

They also spend more than twice as much time taking care of their children – eight hours and 33 minutes for women compared to three hours 55 minutes for men.

It also helps to recognise that some points in our life might bring us more emotional challenges. Ms Needleman says there are two stages of life that are particularly stressful for women in terms of managing mental load and juggling multiple roles.

"The first is when you've got young kids," she says. "You might be trying to work part-time, worrying about sick leave, school holidays, so many activities for kids, busy weekends, trying to maintain couple intimacy, trying to be still part of an extended family, trying to maintain a social friendship support network and trying to juggle your own health and exercise – it can be really tough."

The other stage is at menopause, when fatigue and the pressure of raising teenagers combine with the stress of caring for ageing parents.

But there are ways to ease that sense of being overwhelmed. It starts with pausing to take an audit of your commitments, then prioritising what is essential and what can be delegated (given to someone else) or delayed.

"Often we just keep propelling ourselves towards a certain direction without actually standing outside of it and checking whether it works for us or what we could do differently," says Ms Needleman.

Trying to carve out time for regular exercise is also important, along with getting enough sleep and having a balanced diet. 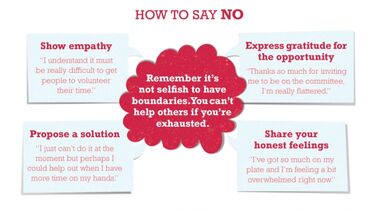 Say yes to no

One of the greatest skills a woman can master is learning how to say no and not over-commit, says Ms Needleman.

She says a lot of women don't have the capacity to say no, but need to understand that being assertive is not being mean to other people. "There's a lot of work around valuing yourself and what messages you give yourself," she says.

"That is often related to their family origin so we need to look at where they learned not to care for themselves ... and how that might translate to their current circumstances."

Prof Kulkarni says reaching out for support from family, friends and neighbours is an important protective factor in preventing burnout, as is taking breaks – whether a long holiday, or a few minutes of 'alone time' each day – to recharge and reflect.

"Taking time to step back and ask what is really important to you is a critical factor in managing mental load," she says. "If you can get that sorted, then a lot of other things fall in place because you realise if it's not done perfectly, it doesn't matter."

Read more about supporting your mental and emotional health.