More regular periods, more weight loss, more pregnancies and improved mood were just some of the benefits seen in an Australian clinical trial of a herbal treatment used with overweight women suffering from polycystic ovary syndrome (PCOS) and irregular periods.

The three-month randomised clinical trial, conducted through the National Institute of Complementary Medicine at Western Sydney University, was undertaken by 122 women from Queensland, New South Wales and Victoria, aged from 18-22, hailing from a range of ethnic groups and with varying physical abilities.

PCOS is a condition that affects 12-18% of women of reproductive age (up to 21% in high-risk groups such as Indigenous women) and causes symptoms such as excess hair (hirsutism), fertility problems, hair loss, weight gain and increased anxiety and depression.

The trial's lead researcher, Dr Susan Arentz of Western Sydney University, said two out of five women with PCOS reported using natural medicine, but evidence for its effectiveness or adverse effects was scarce.

Many women around the world are using natural treatments, often in conjunction with medications and the research priority is to find out if these natural treatments are actually providing positive effects and whether they are safe,"

Women in the trial were separated into two groups: a test group that took the herbal medications and a control group that did not.

Even though all women in the trial had to follow the same diet and exercise controls, or 'lifestyle interventions' (recommended as the first-line treatment for PCOS), women in the test group showed a "significant improvement" after three months, compared to those in the control group, according to the results published in Phytotherapy Research in September.

At the end of the three-month trial, more than half of the women in the test group – 33 of 60 – had regular periods, compared to just under a quarter – 15 of 62 – in the control group.

Conception rates were also significantly higher for women in the test group, with 11 pregnancies, compared to three in the control group (medically assisted reproduction was not used by any participants during the trial). 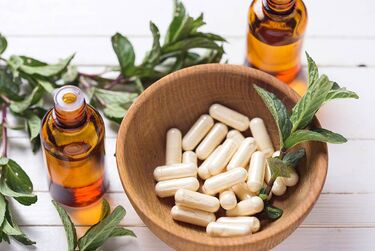 The test group were given two tablets.

The first, made specifically for the trial, contained the herbs:

The other tablet contained the herb tribulus (Tribulus terrestris), because of its ability to enhance the effect of follicle-stimulating hormone (FSH) in women.

Dr Arentz said while the clinical trial showed herbal treatment did provide "significant improvements" for women with PCOS, she was unsure exactly why.

"New research is needed to find out exactly which parts of the treatment worked – the actual mechanisms of effect," she said.

The trial did, however, show the effectiveness of lifestyle interventions in treating the symptoms of PCOS. After three months, the majority of women across both the test and control groups had improved lifestyle practices, with 73% (89 of 122) exercising at least 150 minutes per week and 105 of 122 (86%) reporting health-conscious dietary decisions.

"These outcomes are really important because they empower women to take responsibility for their own health needs. And can put them in a position to help themselves."

Important advice from our naturopath

Jean Hailes for Women's Health naturopath Sandra Villella said it was "wonderful to see such quality research using herbs that many herbalists actually use in practice for the management of PCOS."

However, she said it was important for women to be aware that the combination of herbs used in the clinical trial was specifically formulated for the trial, so women should therefore not attempt to self-administer treatment with such herbs.

"While this combination can now be prescribed by naturopaths and herbalists, the results cannot be replicated by eating some licorice confectionery every day and adding some cinnamon to your porridge," she said, adding that the Cinnamomum verum used in the trial was not the common cinnamon sold as a spice, or in many over-the-counter herbal tablets.

"Herbal medicines are indeed medicines, and should be prescribed by health practitioners appropriately trained in their use, who know when and which herbs should be used for an individual," she said.

Read more about PCOS or access our Natural therapies webpages, which include information on their safety and effectiveness.