As you might expect from a woman raised in the outback, Muriel Halsted has a no-nonsense approach to life.

This might explain the global appeal of her three-ingredient scone recipe (using only flour, cream, and lemonade) which notched up to 8.8 million views worldwide during the pandemic.

Three years on and now aged nearly 95, Muriel reckons she has also cracked the recipe for a long and healthy life. 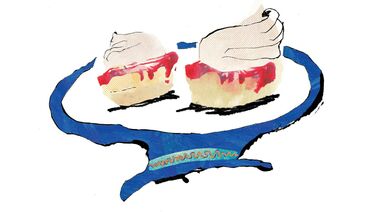 “I have always looked after my health over the years with regular blood tests, check-ups, and further treatment, when necessary,” says Muriel.

Hers has been a busy life. In addition to raising seven children, she has worked the different cattle and sheep properties that she and her late husband, Bill, called home for most of their lives. She survived through war, two droughts and two floods, experiences that would have tested the best of us.

“We bought our first property just after the flood of ’55 and the first year we were there, we had another flood,” she recalls. “After that, we had two years of no rain at all. Bill had to shoot all our cattle because they were getting bogged in mud. It was a terrible time.”

Throughout her long life, Muriel has always believed in sticking to a healthy diet with no additives and home-grown ingredients.

“You killed your own sheep and that’s where you got your meat,” she says. “You had your own chooks for eggs. The cows were milked every morning and you separated the milk to make your own butter.”

I have remained diligent with mind/brain health by reading novels, doing crosswords and puzzles. I also like to stay as socially active as I can."

If she were to venture a ‘recipe’ for healthy ageing, Muriel says she would recommend staying active, mentally as well as physically. “I stayed active playing tennis, looking after seven children who were involved with horse sports, and helping with all aspects of farming life.

“I have remained diligent with mind/brain health by reading novels, doing crosswords and puzzles. I also like to stay as socially active as I can. I feel that is very important in overall health, especially as we age.”

Apart from Bill, her late husband of nearly 60 years, the Country Women’s Association (CWA) has been one of the great constants in her life. She has been a member for more than 70 years.

“It’s such a big part of the lives of so many women in regional Australia,” she says. “It’s a source of great friends and support.”

What to read next...

Fact sheets: Staying well as you age
Available in plain English and translated into 10 languages, this fact sheet provide tips for protecting your mental health as you age.

Podcast: Sconversations
A chat with CEO of the NSW CWA, Danica Leys, about the health needs of women in rural, regional and remote Australia.

Meet the 81-year-old who still planks every day