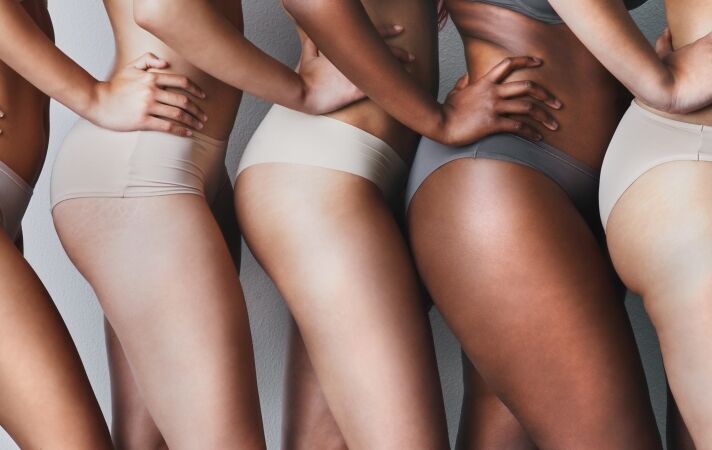 Hormones can be a complex area of women's health, but certain changes to your vagina and vulva can give you some insight. So, what are the clues that these body parts are giving you, and what mysteries can they explain?

Your cycle and your cervix

If you're a woman who has periods and are not on hormonal contraception, understanding the pattern of your own discharge throughout the month can hint at the high and lows of certain hormones.

The cervix is part of the female reproductive system and acts as a gateway between the top of your vagina (the internal tube) and the uterus (womb). Glands in and around the cervix produce fluid, which often turns into vaginal discharge. This can change in colour, consistency and volume throughout the month in response to your changing hormones.

The changes seen in your vaginal discharge can show where you are in your cycle and may help to indicate when ovulation – the release of an egg from one of your ovaries – has occurred.

Recognising the different phases of your discharge can put you more in touch with the rhythms of your own body and menstrual cycle, giving you information about your likelihood of becoming pregnant, or simply helping you to know the regular hormonal pattern of your own body – and, in turn, to be aware of any changes that aren't normal for you.

It's important to remember that the pattern and experience of cervical fluid and vaginal discharge is different for everyone, so take the time to learn about your unique changes.

Being more aware of your own patterns also means you'll be better able to pinpoint possible problems if they arise. Vaginal infections, such as bacterial vaginosis and vaginal candidiasis (thrush), often produce changes to vaginal discharge, so knowing what's normal for you can help you to identify when things aren't right.

However, know that a wide range of factors, as well as these infections, can change your vaginal discharge. Sex, semen, diet and your periods are some of the common factors, so think about what else is going on in your life and these body parts before making any conclusions.

Read more about what's normal and what's not when it comes to vulval health and vaginal discharge.

Menstrual cycle and your cervical fluid

This image charts the rising and falling of the two main female hormones, oestrogen and progesterone, in a typical 28-day menstrual cycle.

Day 1 of a menstrual cycle is the first day that your bleed (period) begins. Throughout the first week of a typical cycle, levels of oestrogen and progesterone are low. Typically, the cervix does not produce much fluid when these hormones are low, but because you've got your period, you probably won't notice it anyway.

By the end of week 1 in a typical cycle, oestrogen levels begin to climb and so too does production of cervical fluid. For some women, cervical fluid first becomes noticeable in small amounts as 'sticky' vaginal discharge around this time, while many women may have no discharge at all.

Throughout week 2, oestrogen levels climb higher still, indicated by an increase in vaginal discharge, as well as a change to its colour and consistency; there is often greater water content in the cervical fluid at this stage, so the vaginal discharge can become creamy, cloudy, whitish or yellowish in colour.

These higher oestrogen levels also affect the consistency of the cervical fluid, making it stretchy and slippery (like raw egg white). For some women, their peaking oestrogen levels can make the fluid more watery and thin.

As soon as ovulation is over, your hormones levels change once again, and so too does the cervical fluid. In the day or two after ovulation, fluid production typically decreases, loses its slippery texture and often becomes thicker.

Progesterone, the main hormone in the second half of the menstrual cycle, acts to decrease fluid secretion. So when progesterone is high you may notice a smaller amount of discharge, or it may be 'sticky' or 'tacky'.

By the end of week 4 in a typical 28-day cycle, your body is again preparing for the period, and so the cycle repeats.

It is important to know that simply noticing changes in cervical fluid cannot reliably confirm ovulation – other signs and tests often need to be considered. Relying on cervical fluid changes on their own is not accurate enough to use as a contraceptive method.

The method in the madness

For those not yet familiar with their fluid changes, this cycle of cervical fluid could seem like a random sequence – changing without rhyme or reason. But in fact, your fluctuating hormones are triggering these changes in precise preparation for ovulation and to encourage pregnancy.

If sexual intercourse has occurred, the more slippery cervical fluid at mid-cycle can help sperm to move through the cervix to the uterus, and is specifically timed prior to ovulation to increase the chance of conception.

Cervical fluid is also a clever protective mechanism, helping to keep out unhealthy bacteria and viruses, with research confirming that it contains antibodies to fight them off.

What if you're on the Pill?

Women who are taking hormonal contraceptives, or who aren't ovulating, usually don't experience these cyclical changes in cervical fluid.

Many hormonal contraceptives such as the combined oral contraceptive pill ('the Pill', containing oestrogen and progesterone) thicken cervical fluid because of the hormones they contain. So it's common for women who take the Pill to have a whitish vaginal discharge quite consistently throughout the month.

Thickening of the cervical fluid prevents sperm from entering the uterus and is one of the ways some hormonal contraceptives prevent pregnancy.

The Pill also prevents egg release, whereas the mini-Pill (progestogen only) relies solely on this cervical fluid thickening to prevent conception.

In pregnancy there are so many changes to your hormones, and these fluctuations often have follow-on effects to your vulva and vagina.

In pregnancy, levels of oestrogen and progesterone increase. Just like in menstruating women, this increases the production of cervical fluid and vaginal discharge.

Healthy vaginal discharge in pregnancy is thin and clear or white, and has only a mild odour. It does not contain blood and is not associated with vulval itch, so see your doctor if you notice these changes.

Interestingly, an increased amount of discharge can be one of the first signs of pregnancy. But this kind of change can be due to many other factors, so a pregnancy test would still be needed to confirm it.

The reason behind this increase in cervical fluid is thought to be a protective factor against infection. The cervix acts as the gateway to the womb, and a greater production of fluid means a greater barrier between the baby and potential harmful bacteria and viruses from the outside world.

Pregnant women may also notice they are more susceptible to bacterial vaginosis and vaginal candidiasis (thrush). Again, this is due to the increased levels of oestrogen and progesterone.

Changes during the menopause

Changes to the vagina and vulva are common during the perimenopause (the time in the lead-up to menopause), and are due to – yes, you guessed it! – your changing hormone levels.

Women in midlife typically experience a dramatic reduction in oestrogen levels, which can affect the vaginal and vulval tissues, making them thinner, less elastic and more prone to damage and pain.

The overall amount of vaginal discharge and natural lubrication also often decreases after the menopause. And while this change is normal, it can lead to symptoms of vulval dryness, irritation and painful sex.

The good news is, these symptoms can be successfully treated with vaginal moisturisers, lubricants or topical hormonal creams, so you don't have to put up with them; see your trusted GP to discuss your management options.

The only constant is change

When it comes to female hormonal health, it can seem like change is always present. And just when you think you know what's going on, it can often change again!

But by being aware of the subtle clues, many women can see the signs that their body is showing them and appreciate the greater cycle at play.