If you served up last night’s dinner to a hunter-gatherer ancestor, would they recognise it as food? If they did the same to you, would you be willing to take a bite? It’s safe to say that our diets have changed considerably over the course of history, with much of what we eat now coming from a factory rather than a farm. And while it’s plain to see the impact it’s having on our physical health – fuelling rates of obesity, type 2 diabetes and heart disease – what effect is it having on our mental health? Is there a link between food and mood?

To answer these questions and more, we sat down with researchers from Deakin University’s aptly named Food & Mood Centre, Dr Hajara Aslam and Ms Samantha Dawson, and Jean Hailes naturopath Sandra Villella. Together they join the dots between diet and mental wellbeing and talk about the best foods for health and happiness.

The link between food and mood

The Food & Mood Centre, a world-leading research hub based in Victoria, is dedicated to exploring how diet may impact mental health. The centre’s Dr Aslam says a consistent body of evidence shows that people who have a healthier diet have a lower risk of depression.

“This trend is visible right across the lifespan, from early childhood to older adults,” she says.

“It’s also seen in relation to the quality of a mother’s diet during pregnancy and the mental health of their children.”

Explore more of Day 4 of Women's Health Week or continue reading below.

There are many parts at play, but it is the role of the gut microbiota – the microorganisms in our gut – that is of interest to researchers at the Centre, in particular looking at how diet can affect the gut microbiota “and in turn how these changes can influence our mental health,” says Dr Aslam.

Our gut is teeming with microscopic life, called our microbiota. Its home is the gut microbiome, and it’s made up of literally trillions of bacteria, viruses and fungi, says Dr Aslam.

As humans, we carry more microbe cells than we carry human cells, so the gut microbiome is increasingly being understood as a separate organ,” she says.

While it might sound a bit frightening to hear you have a mini-universe of bugs living in your digestive system, these microbes can actually live in harmony with us – and when their populations are strong and healthy, we reap health benefits too.

You are what you eat (and so is your microbiota)

Of particular interest to researchers at the Food & Mood Centre, is that the gut microbiota changes in response to what we eat. And it can change fast. Research fellow Samantha Dawson says two studies have looked at the impact of different diets (for example, an animal-based diet – rich in meat, cheese and eggs – versus a plant-based diet) and, “within that first 24-hour period of starting a different diet, they could detect a change in the gut microbiota”.

Ms Dawson says the fact that the gut microbiota responds so readily to what we eat is heartening. “It means there’s a bit of a hope. If you’re not happy with your diet, you can change it and that might influence your gut. It also speaks to the importance of sustaining a healthy diet in the long-term.”

The connection between microbes & mood

Dr Aslam says the relationship between your gut microbiota and your brain is complex and “bi-directional” – meaning that these two organs ‘talk’ to each other by various biological pathways.

Not only are the gut microbiota involved in pathways related to producing serotonin and dopamine – ‘brain chemicals’ linked to mood, motivation and feelings of reward – it can also “influence inflammation and stress responses in the body, so by all these means, the gut microbiota is communicating with the brain,” she says.

Research from other studies has also revealed a key connection: “Observational studies have shown that the gut microbiota profile of people with depression and without depression are different.”

The chicken or the egg?

Even so, there is still evidence to suggest “healthier diets are associated with better mental health and better gut microbiota profiles,” says Ms Dawson.

The secret to eating for health and happiness is, in fact, no secret at all: it’s the same food groups that appear time and time again as being not only good for our physical health, but for our mental health now too.

“[The food groups to focus on are] wholegrains, vegetables, fruits, legumes, nuts, and healthy fats,” says Ms Dawson. “In particular, you want the fibre. That seems to be really good for your gut.” Learn more about the evidence-based benefits of the Mediterranean diet.

Following a ‘good-mood diet’ is also about what we should eat less of, which is “less of the highly refined foods, the foods that don’t have fibre”, says Ms Dawson. “That’s the packaged highly processed foods [such as chips, biscuits and take-away foods] which are pretty common in people’s diets,” she says.

Ms Villella agrees, saying that the Mediterranean diet is low in refined carbohydrates and “unhealthy trans fats found in fast food and commercial bakery goods which have been associated with a higher depression risk”.

A diet rich in whole and plant foods, such as the Mediterranean diet, may be supportive of mental health for various reasons. “We know the Mediterranean diet plays a role in reducing the risk of cardiovascular disease and metabolic syndrome, and in fact depression shares several mechanisms that are similar to these diseases,” says Ms Villella.

These foods fight inflammation and may help to protect brain and nerve cells from damage via their antioxidant action, says Ms Villella. Wholegrains such as brown rice, oats and wholemeal bread are rich in B vitamins, “which play important roles in the making of neurotransmitters (brain chemicals) that affect mood”, she says.

Dr Aslam says it is the important compounds in these whole foods that benefit our health beyond simple nutrition and fuel. “Vitamins, minerals, omega-3 fats, probiotics, prebiotics – these are all functionally-active ingredients and they can affect our physical and mental health overall,” she says.

“In particular, these foods have a beneficial impact on the gut microbiota as well.” 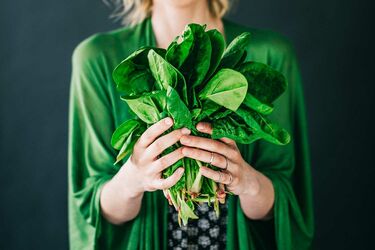 Both Ms Dawson and Dr Aslam agree that adapting to a new diet pattern can be challenging. “At the outset it might appear costly, and it might need a bit of dedication,” says Dr Aslam. But before you throw out all the food in your freezer, for best effect, it’s recommended to start simple and start small.

“[For example,] if you’re someone who doesn’t eat vegetables at all, start by including one serve a day then gradually increase it. That way you’ll start enjoying new things on your plate,” says Dr Aslam.

When it comes to feeding your gut microbiota, dietary variety is as important as diet quality, says Ms Dawson, who suggests you “aim for a wide range of colourful vegies” in your meal. Adding different spices to your cooking can also pay dividends in both flavour and benefit. “Certain spices such as cumin and turmeric have really good anti-inflammatory and antioxidant properties,” says Dr Aslam.

Ms Dawson believes that being aware of the many health impacts of your diet is an all-important first step. “Making that connection between what you eat and your gut, and then in turn, your gut and your health, might help people to stop and think ‘Oh okay, I will have that high-fibre food instead of that processed food.’ It’s about seeing that link,” she says.

The good news? Eating to support your mental health is not out of reach for anybody. It doesn’t involve secret superfoods, strict rules or striving for perfection. As Ms Dawson says, “It’s about what you do most of the time. If you’re following a healthy diet pattern with good habits for most of the time, that is a good way forward.” The Jean Hailes approach to food and eating is all about good nutrition, eating well, enjoyment and balance. Head to our recipes section for inspiration!

The feeling of blah