Eyes wide shut: how caffeine can affect your sleep 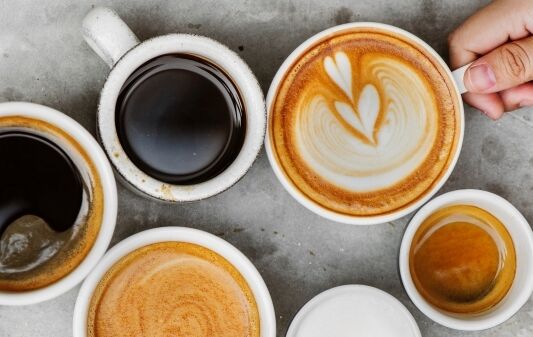 It's often the first ritual in our day, but just how much caffeine is in that morning cup of coffee or tea?

Caffeine is a stimulant. It works on receptors in the brain to increase alertness and prevent sleepiness. But how much caffeine is too much, and how much will start to affect your sleep?

You may have read that a cup of coffee contains a certain amount of caffeine, or that two black teas have as much caffeine as a single latté. However, tracking our true daily caffeine intake is a little more complicated than that, says Accredited Practising Dietitian Kim Menzies.

"There can be huge variations for the same product," says Ms Menzies. "The caffeine in an espresso coffee [or a shot of coffee from a coffee machine] can range from as little as 80mg up to 200mg. But Food Standards Australia New Zealand cites 145mg as the common amount."

Exactly where your morning take-away sits on the scale comes to down to a variety of factors.

"Part of it has to do with differences in how the coffee beans were grown, where they were grown, the manufacturing process, the types of beans used, as well as how it's prepared," says Ms Menzies.

"A cup of instant coffee, by comparison, contains around 80mg of caffeine, but again, this amount is a guide only and can depend on many things."

The caffeine in a cup of black tea can range anywhere between 25-110mg, but 50mg is an average amount. "How long you brew your tea, the amount of tea and water you use, whether the tea is loose or in teabags can all have an impact," says Ms Villella.

You may also be surprised to learn that even green tea contains caffeine; around 30-50mg per cup. It is, however, typically less than black tea and much less than coffee.

In ready-to-drink beverages such as cola and energy drinks, the caffeine content is standardised, and therefore more predictable.

By law, energy drinks are only allowed to contain 80mg of caffeine per 250ml can. Cola drinks must not exceed 145mg per litre, so typically that means they have around 49mg in a 375ml can.

Do you like to enjoy a little piece of chocolate with a cup of tea before bed? This may also be helping to keep you awake, as cocoa beans – the main ingredient of chocolate – contain caffeine. Combined with the tea, "you might actually be having the same amount of caffeine as an espresso coffee," says Ms Menzies.

How much caffeine is too much?

Caffeine is one of the longest and widely used drugs in the world, but when used in moderation, it's very safe for most people.

It is recommended that healthy adults should be having no more than 400mg of caffeine a day, and no more than 200mg in a single dose. Higher amounts than this can cause effects such as anxiety, restlessness and an increased heart rate.

For pregnant women, the recommended safe dose is no more than 200mg of caffeine per day.

"Caffeine crosses the placenta rapidly and we know that in pregnant women, it stays in the body longer. A foetus [unborn baby] can't break down caffeine," says Ms Menzies.

"That's not to say that pregnant women can't have caffeine – 200mg or less per day is safe for the woman and the baby," she says.

At what amounts does caffeine impact sleep?

Ms Villella explains there's a catch-22 situation when it comes to caffeine and sleep, given that caffeine is commonly used to fight fatigue.

To work out whether the caffeine you're consuming is affecting your sleep, it's important to look at how caffeine acts in the body.

One of the things we know about caffeine is that it is rapidly absorbed by the body. Studies show that levels peak within 30 minutes of consuming it.

However, the half-life of caffeine – that is, the time it takes the body to eliminate 50% of what was consumed – can be very different for different people.

Research shows that the half-life of caffeine can last between 2 and 10 hours.

A person's age, body weight, certain medications, their liver health and susceptibility to caffeine can all affect how long caffeine stays in the body.

Together with all the differences between single products and the many variations in each person consuming them, it's no surprise there might be differences in how each of us responds to caffeine.

So while some people may still feel the 'buzz' of their morning coffee well into the afternoon, others may crave a second cup to get them through a busy day.

People who regularly consume caffeine can also build up a tolerance to its effects.

To avoid caffeine affecting your sleep, as a general guide the recommendations are to take particular note of your caffeine consumption in the 1-2 hours before bed. Research shows that doses of 100mg around bedtime reduce the ability to fall asleep and stay asleep.

But if you have less than that – for example, a cup of green tea as part of your night-time routine – it's likely not to have this effect.

Should people with a sleep disorder cut out all caffeine?

Ms Menzies says people are often quick to blame caffeine for their insomnia. While it certainly can play a part in sleep disorders, there are likely to be other issues involved.

"It's probably worthwhile to look at your caffeine consumption, but often sleep disorders have multiple causes," she says.

"There are certainly people who are more sensitive to caffeine, and a person's individual response to caffeine is important to bear in mind. But cutting it out completely is not always necessary."

Ms Menzies also says that people who experience insomnia may need to be wary of using caffeine "as a band-aid solution".

"You can get trapped in a cycle [of drinking too much coffee to help with fatigue], but it's helpful to put effort into other practices that won't feed this vicious cycle; doing enough exercise, eating nourishing foods, taking good care of yourself and nourishing the whole person."

Rather than cutting out caffeine, Ms Menzies advises a more balanced approach.

She suggests taking note of all the caffeine consumed throughout the day, from all sources; from coffee to cola, from chocolate to energy drinks.

If it's above the recommended 400mg a day, or if it just feels too much for you, Ms Menzies recommends taking a step back and asking some wider questions.

"Ask the why," says Ms Menzies. "What's behind me drinking lots of coffee or eating lots of chocolate at night? If you're needing these extra 'pick-me-ups', are there other self-care strategies that might be better?".

"If you're eating lots of chocolate at night, is it emotional eating? Is your night routine helpful for sleep? Are there other night-time routines that would better for a good night's rest?"

"Any habit we develop, it's always good to stop and check in with yourself. Just to ask yourself, 'is this still serving me well?' "

Watch a video from last year's Women's Health Week, in which Ms Menzies talks about the link between food and mood, including tips on what to eat to help keep energy levels up throughout the day.