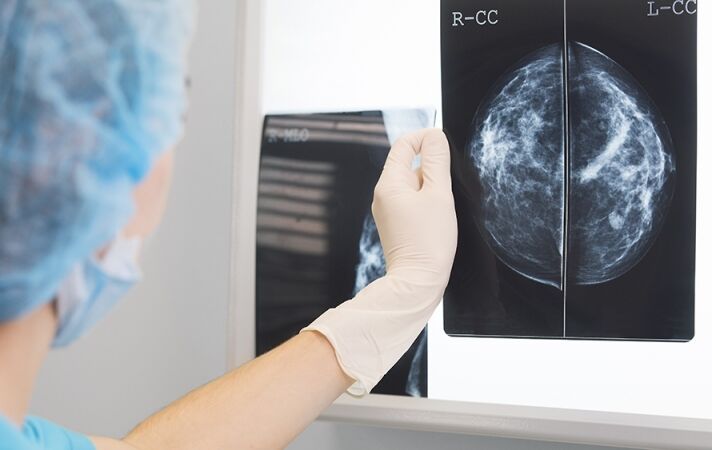 A review by Curtin University and the University of Western Australia, recently published in the journal Climacteric, examined the potential for breast density measurement to be incorporated into screening for breast cancer in Australia.

The Royal Australian and New Zealand College of Radiologists recommends density be mentioned on mammogram reports, as research suggests that about 40% of women aged in their 50s have dense breasts.

What is breast density?

Breast density refers to the concentration of glandular and ductal tissue within the breast. The more glandular elements in a breast, the denser they are. As almost all breast disease arises from glandular elements, it means that women with a greater density of breast tissue can be more susceptible to breast cancer.

Breast density – also called mammographic density – can also create problems for the specialist trying to interpret a mammogram. A dense breast gives the appearance of a thick cloud within the shape of the breast. As abnormalities tend to occur within glandular elements, it makes an abnormality harder to detect if the cloud is thick, says Melbourne breast surgeon Mr Su-Wen Loh.

"Denser breasts, with thicker clouds, are harder to interpret, and harder to be sure are truly normal," says Mr Loh. "This is especially so if the abnormality is subtle – imagine trying to spot a white speck in a white cloud."

"In contrast, low density means there less cloud, making it easier to see through. It is much easier to see a small pattern of abnormality amongst sparse cloud."

Breast density is not based on size, shape, firmness or lumpiness, and can only be detected by mammogram. If you've been told your mammogram is dense, Mr Loh says there are several options you can explore.

"This is a very clever modern improvement to the current 2D-mammogram," says Mr Loh. The machine pans from one side to the other, taking multiple shots of your breast. A computer then reconstructs the image, giving the specialist interpreting the mammogram multiple angles of views through your breast density. It partially overcomes the problem of flat (2D) superimposition.

Supplementing the mammogram with an ultrasound

An ultrasound can specifically look at the dense glandular elements of your breast to help exclude solid lesions that could be "hiding" on mammogram, says Mr Loh.

Magnetic resonance technology is coupled with intravenous contrast to construct 3D images of your breasts in different phases. This normally provides excellent views and can greatly overcome mammographic limitations. "It does not, however, apply to everyone and in every situation," says Mr Loh.

"There is obviously plenty to go into, and it is important you find the right method of screening for yourself," he says. "If you feel you'd like to, I encourage you to further discuss breast density and appropriate screening with your women's health specialist."

For more information, visit our breast health pages. For any women with questions about breast density, speak to your local GP about whether further screening might be right for you.