A healthy eating plan that’s right for you Healthy eating can seem confusing. In the media, there seems to be a constant battle between what we should and shouldn't be putting on our plate. Whether it's for health, weight loss or both, history is peppered with culinary conflict.

However, a familiar pattern keeps repeating – a particular food or food group is considered the 'problem'; and limiting or excluding it from our diets is the 'solution'.

Accredited Practising Dietitian Ms Kim Menzies says that over the decades, the 'problem' food or food group has changed from one to another.

"Thirty years ago, it was fat. Then it was sugar," she says. "Now, it is foods high in carbohydrates that are being 'demonised'.

"We live in a society where diet is based around this black or white thinking. There is no middle ground and that is concerning."

There's healthy eating – and then there's fad diets. Some of today's popular diets have a common thread of strictly limiting the intake of carbohydrates or particular food groups – these range from the ketogenic (or keto) diet to low-carb and paleo diets.

The paleo diet focuses on unprocessed foods and is high in vegetables, fruits, nuts, seeds, meats, fish and naturally-derived fats.

On the paleo 'no-go' list are grains. This includes wholegrains (such as rice, oats, barley) and other grain products (breads, biscuits and flour-based foods). Other foods not allowed are all dairy products and legumes, such as beans, chickpeas and lentils – which Ms Menzies notes are a great source of not just carbohydrates, but protein and other important nutrients. 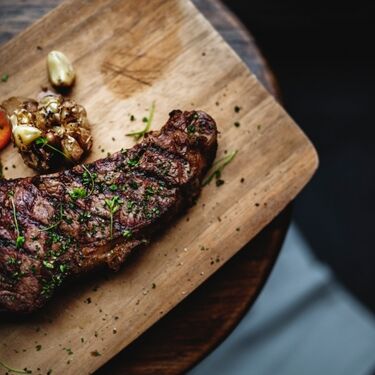 The keto diet, on the other hand, strictly limits the amount of carbohydrate consumed so that the body goes into a state known as ketosis.

"Ketosis occurs when the body does not have access to [the sugar known as] glucose," says Ms Menzies. "Glucose is derived from carbohydrates and is the brain's primary and preferred energy source.

"It takes 3-5 days of following the diet for the body to transition into ketosis. But because the body's preferred source for energy is glucose, it means you need to be really clear on the amounts of fat, protein and carbohydrates being eaten [to stay in it]. That's why it's a very strict diet."

Generally, 60-85% of your daily calories on the keto diet come from fat, 20-25% come from protein, and what's left comes from carbs – usually around 20-50 grams. One slice of bread or one small potato or ½ cup of cooked pasta is equal to about 15g of carbohydrate.

This means that your day is primarily fuelled with fat and protein-based foods such as butter, eggs, meats, seafood, avocado and full-fat cheese, cream and yoghurt.

Low-carb fruits and vegetables such a green leafy vegetables, broccoli, cauliflower and berries are permitted in the keto diet. However, higher carbohydrate foods such as potato, sweet potato, corn, most fruits, milk, bread, biscuits and pastries are avoided to stay within the ketogenic state.

If you're aiming to lose weight through any diet change, Ms Menzies advises asking yourself this all-important question – can you see yourself still on this diet in three months' time?

"If you're unsure or the answer is 'no' then any weight loss that's been achieved through the diet will probably return, plus more," she says.

"This is particularly the case if the new diet involves an extreme change to your normal eating pattern."

"It's highly likely there will be a fair bit of weight loss initially, but on the reintroduction of carbohydrates [or if you stop the fad diet], any excess energy consumed will be stored and we're going to see weight gain."

"The body compensates to prevent 'a famine' occurring again, protecting itself by storing more weight."

Research: the long and short of it

While there is good evidence that limiting carbohydrates and following a paleo or keto diet can result in initial weight loss, these results only tell part of the story.

There aren't many high-quality research trials that look at their long-term weight-loss success, says Ms Menzies.

"That's because, in terms of the keto diet, there is such great variation in what is defined as a 'keto diet', but also because people drop out of the studies because they can't stick to it," she says.

It is also unclear how these diets are impacting other parts of our health in the long-term.

"What is this doing to our bodies? In the whole area of gut flora – we just don't know," says Ms Menzies.

Furthermore, research shows that the weight-loss results of a low-carb, high-fat diet compared to a low-fat, high-carb diet are quite similar – potentially suggesting neither of these nutrients were a 'problem food' to begin with.

Another important factor to consider with these type of diets is what Ms Menzies calls the 'ripple effect', as a sudden and strict change to eating habits does not come without complications.

Does the new diet mean you no longer eat what your family eats? Do you need separate meals? Can you afford a diet that focuses more on expensive items such as meat, butter and eggs and one that forgoes cheaper foods such as legumes, fruits and vegetables?

"For the keto diet particularly, there can be stress involved in trying follow it; recording your food, understanding the percentages," says Ms Menzies.

"Eating out or sharing a meal with friends can also be hard because the strictness of the diet limits the diversity of food choices."

It's therefore important to consider that food is more than nutrients on a plate. It's often one of the ways we enjoy time with family and friends, how we connect with others and the world around us.

A way of eating that works for you

The Mediterranean diet is one such way of eating that provides good nutrition, has no strict rules, and is easy to stick to.

It's also backed by solid long-term evidence that it can reduce the risk of heart disease, type 2 diabetes and various cancers, as well as prevent memory decline and aid weight loss.

"The Mediterranean diet does not limit fat, but focuses on unsaturated fats – the 'healthy fats'. It includes wholegrains, dairy and a wide range of foods," says Ms Menzies.

Rather than excluding certain foods or food groups, the focus of the Mediterranean diet is what you should eat more of. And importantly, that food is also a celebration, a way of connecting to others – where rules and guilt don't apply.

If you're trying to eat healthier, it often comes down to what works for you on a daily basis, as well as long-term. That will be different for every woman, and also likely to change not just with the seasons, but your life stage.

So, if you're trying to eat healthier foods, don't forget the importance of also nurturing a healthy relationship with food; one ruled by calm and connection – not conflict.