The biggest week in Australia for women’s health and wellbeing—Jean Hailes' Women’s Health Week 2021—reached more communities, more workplaces and more women than ever before.

Download the full report for highlights from the Women’s Health Week 2021 campaign. Since its beginning in 2013, the annual Jean Hailes' Women’s Health Week campaign has grown significantly year-on-year, and 2021 was no exception. Record engagement was a feature of this year’s success, including unprecedented reach into Indigenous communities, women in rural and remote areas, women in the justice system, as well as multicultural communities.

Across Australia there were more than 128,000 registrants for 2277 events, alongside our highest number of community partners, social media engagements and website visits, which all contributed to the campaign’s best year.

Other campaign highlights included an audience of more than 54,000 online subscribers and a social media reach of more than 3.6 million people. A multicultural focus in 2021 also saw fact sheets on endometriosis, polycystic ovary syndrome (PCOS) and healthy ageing being made available in eight languages, social media tiles with a health check message translated into 23 languages, and a heavy periods video released in six languages, garnering over 30,000 views in the first 24 hours and currently viewed more than 700,000 times.

The 2021 week encouraged women to set aside time to focus on their wellbeing, ensure their health checks and screenings were up to date, and to be kind to themselves during these challenging pandemic times. A post-campaign evaluation survey of women who took part in Women’s Health Week found that:

We would also like to acknowledge the support of the Australian Government and give special thanks to our many partners – corporate, community and media – together with our ambassadors and champions, who help us achieve our extraordinary campaign reach and help us to give women’s health a voice,” 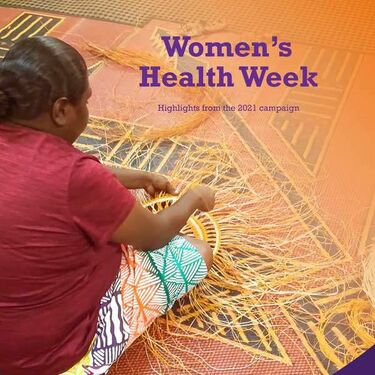 If you would like to read more highlights from the Women’s Health Week 2021 campaign, you can download the full report here.