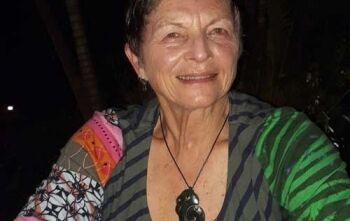 Linda Oliver, 71, was born in New Zealand, but has now lived in Australia for almost 40 years.

After spending 12 years living in the Blue Mountains in NSW, Linda and her partner of 20 years, Sarah, decided to make the move to Hobart, Tasmania. They've been enjoying a relaxed lifestyle there for almost five years.

"It's just lovely down here," says Linda. "It reminds me very much of New Zealand actually, so that was an added bonus. Everyone is incredibly friendly … when you get on the bus, it's 'morning, morning'. It's really nice."

Linda trained as a nurse in New Zealand and a midwife in Australia. She also has a Bachelor of Arts degree in Women's Studies and a Masters in Health Science. After 50 years of working in the field, she tried to retire, but was lured back into working in women's health. She now works casually at Family Planning Tasmania.

She keeps active by riding to work on her electric bicycle. "I've always ridden a bicycle from when I was really young," she says. She would ride her ordinary bicycle to work, but the hilly terrain of Hobart proved a challenge. "I would arrive really bright red in the face, hot and sweaty, and I was like, 'oh this is just shocking'," she laughs.

She decided to get an electric bicycle "because then I would arrive at work with some decorum."

Linda works an average of two days a fortnight, which suits her perfectly. "I've still got passion and it's really good for me just to have those two days, because I do other things as well."

Working has also been good for her mental health and keeping her mind sharp. She has had to learn how to manage a new computer database system in her job. "I think it's really good to be cognitively busy and slightly challenged," she says.

Linda believes staying mentally stimulated and connected with the community is very important to maintaining overall good health. She is enrolled in the University of the Third Age, where her areas of study range from Patriotism in the 19th century to pre-war Britain on film.

She and Sarah enjoy financial stability, which is also crucial to healthy mental ageing. "We feel very privileged and we don't take it for granted. We've worked very, very hard to be in this position. I know that's not the same for everyone. With our house, two dogs and a lovely circle of friends, we feel very lucky.

Linda and Sarah both take good care of their health, following a primarily Mediterranean diet. "We call ourselves 'vegequarians', so we have fish once or twice a week," she says. "But we don't eat any red meat and we do enjoy a glass of wine at the end of the day and sometimes gin and tonic on the odd warm Hobart evening.

"I sometimes have something sweet during the week, but don't eat a lot of sugar. We don't eat chocolates or cakes or anything like that. If we have anything for dessert, it's usually berries and yogurt and nuts."

Linda also belongs to a bushwalking group, the Wellington Wanderers. "It's an LGBTIQ group, but anyone can walk with us," she says. "It's just a lovely group of like-minded people and we do some fantastic walks here."

Linda had to deal with the passing of her mother from bowel cancer in 2011. "She was a fantastic woman – almost my best friend, I could say," she says.

Thankfully, due to her mother remarrying, Linda had the support of an extended clan of siblings. "My mother had two children, she married a man who had four, and then they had three more, so we had a big tribe, a sort of Brady Bunch," she says. "We are close and we just dealt with Mum's death like you do, you grieve and grieve, and I often hear her encouraging voice in my head – 'things are looking up Linda', and I feel somewhat reassured.

"We always think of my mother on the day that she died, every year. We'll have a gin and tonic; she would always say 'a bird can't fly on one wing', so we always have two."

Visit our Healthy ageing page for more stories from women about their experiences with getting older.