Book review: See what you made me do – power, control and domestic abuse See what you made me do is an exploration of the widespread epidemic of domestic abuse in Australia, which kills one woman per week and accounts for nearly 60 per cent of the women hospitalised for assault. 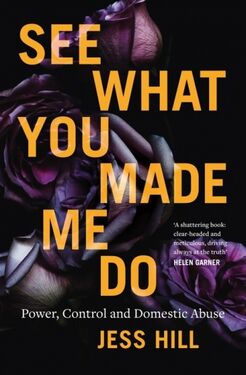 The book begins by recounting a visit to Safe Steps, Victoria's 24/7 family violence helpline, where the author learns that many women who call the line are repeat callers and return to an abusive partner seven time before eventually leaving. Hill queries a counsellor as to whether it is frustrating when they think a woman is ready to leave but then decides to go back. The counsellor replies no and says, "I'm frustrated that even though he promised to stop, he chose to abuse her again."

This sets the tone for the rest of the book which shifts the conversation from 'why does she stay', to 'why does he do it?', laying responsibility with the perpetrator instead of the victim.

Hill looks at the pattern of power and control, whether physical or not, that is inherent in domestic abuse, and combines rich storytelling with compelling research to illustrate the pervasive nature of domestic abuse within society. Hill doesn't shy away from telling the worst stories of violence and abuse, and it's worth mentioning that the graphic content she describes may be triggering for some – certainly her aim is to shock and horrify the reader to action.

Hill identifies 2014 as a watershed year in which people in Australia started to recognise the extent of domestic abuse, following the brutal murder of 11-year-old Luke Batty at the hands of his father. At the time, mother Rosie Batty said, "Family violence happens to everybody, no matter how nice your house is, how intelligent you are. It happens to everyone and anyone." Hill builds upon the decades of work this sector to illustrate how systems of inequality lead to the many different forms of violence against women.

The book's descriptions of survivors' experiences are gripping, but its weaknesses may be its focus on the psychological motivations of individual men who abuse women – a contested topic that sometimes is at odds with the research used to create the national primary prevention framework, Change the story. Hill's calls for change also focus on programs and initiatives to improve our response to violence – working with the justice system and perpetrators – and disregards population-wide primary prevention aimed at stopping violence before it starts. To effectively prevent violence against women we need to invest in all parts of the sector: primary prevention, early intervention and response.

Despite the gravity of the topic and the many harrowing experiences shared from survivors, See what you made me do is nevertheless an inspiring read. Beyond the human tragedy, there are stories of unbelievable courage and a call to action the reader cannot ignore.

Jess Hill is an investigative reporter who contributes regularly to Radio National's Background Briefing and The Monthly. She has reported extensively on domestic violence and is the recipient of three Our Watch Walkley Awards, including the Gold Award for reporting on violence against women.