Fertility is your ability to produce a child. Infertility is when you have had 12 months of unprotected sexual intercourse and you have not become pregnant.

Fertility can be affected by illness, how old you are, your weight, whether you or your partner smokes, or takes drugs, or even perhaps consumes too much caffeine. Sexually transmissible infections (STIs) can also affect fertility.

What do fertility & infertility mean?

Fertility is the ability to produce a child. Fertility requires healthy sperm from the male to successfully make its way to a healthy egg, penetrate the egg and then that egg is successfully implanted in the lining of the uterus. 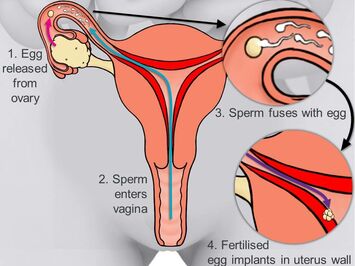 A problem at any of these steps can affect your fertility.

Infertility is defined as 12 months of regular unprotected intercourse without conception or pregnancy.

Age and how you live your life, whether you smoke, drink heavily, have an illness or are overweight or underweight can affect both male and female fertility.

Fertility declines with age. Women are born with all the eggs they will ever have and as you age these are either released (ovulation – around mid-month of your cycle), disappear or deteriorate.

With age, it takes longer to conceive and the risk of not being able to get pregnant increases.

The chances of pregnancy without in vitro fertilisation (IVF) start to decrease gradually about the age of 32, and after 35 the decline in women's fertility accelerates dramatically. "So it's worrying indeed that 80% of Australians can't identify when that decline begins," says Fertility Coalition spokesperson Louise Johnson. "Both men's and women's fertility starts to decline earlier than most Australians think it does. As most people want to have children or want more children, fertility knowledge is incredibly important."

Being overweight or underweight can reduce your fertility by causing hormonal imbalances and problems with ovulation.

To understand if you are overweight or underweight you may like to calculate your BMI and/or visit your doctor, who will discuss all aspects of your weight and health with you.

The more you are exposed to both active and passive smoking, the more you risk affecting both your ability to get pregnant and the time it takes to get pregnant. Smoking is associated with changes in the cells of the ovary increasing the chance of genetic abnormalities, miscarriage and ectopic pregnancy. It is thought that smoking may accelerate the loss of eggs in women also. This makes sense given that women who smoke can experience menopause at an earlier age than women who don't smoke[1].

If your male partner is a heavy smoker, this can significantly contribute to delayed conception also. Smoking can results in a lower sperm count compared to men who don't smoke.

It is estimated that most of the negative effects of smoking on fertility are reversed a year after stopping smoking.

The relationship between alcohol and fertility isn't easy to define.

The scientific evidence about the effects of low to moderate drinking on women's and men's fertility isn't clear, however it is more likely that heavy drinking (more than six units of alcohol per week and no alcohol free days) affects fertility.

The National Health and Medical Research Council recommends women trying to get pregnant should not drink alcohol at all.

The use of drugs should be avoided when planning a pregnancy as they can be harmful to an unborn baby. Recreational drugs including cocaine, heroin and ecstasy have also been shown to affect female fertility. Long-term use of these drugs can lead to permanent reproductive problems and prevent you from becoming pregnant.

Prescription & over the counter medications

If you are planning to get pregnant talk to your doctor about any prescription medications, over the counter medications or complementary medicines you are taking, to make sure they are safe.

It is not advisable to stop taking prescription medications without first consulting your doctor.

Some over the counter drugs, supplements such as vitamins, and herbal medicines, can also be harmful to the unborn baby so check these out with your doctor.

Sexually transmissible infections (STIs), particularly chlamydia and gonorrhoea, can affect the fertility of both women and men.

Chlamydia is a common bacterial infection that can affect any person who has unprotected sex. It is estimated that at least 75% of women experience no symptoms. As symptoms of chlamydia can be similar to other conditions such as thrush and cystitis, it may also be overlooked.

If symptoms do occur they can include:

Chlamydia is treated with antibiotics. How chlamydia can affect fertility

Chlamydia causes inflammation of the urethra (tube from the bladder to the urinary opening) and/or the cervix (neck of the uterus). If left untreated the infection can travel to the uterus, fallopian tubes and ovaries. When the infection moves to these areas it is referred to as pelvic inflammatory disease (PID).

A lack of specific signs and symptoms means gonorrhoea may go undetected for longer in women.

Often there are no symptoms, however sometimes gonorrhoea causes:

Gonorrhoea is treated with antibiotics.

How gonrrhoea can affect fertility

If left untreated, gonorrhoea can lead to pelvic inflammatory disease (PID) as described above.

PID generally caused by an STI may form scar tissue causing blockages and adhesions in and around the ovaries, fallopian tubes and the pelvic region. This can result in serious health issues including chronic pelvic pain, fertility problems or an ectopic pregnancy where the egg settles in the fallopian tube. When the foetus grows, it eventually bursts the tube causing severe bleeding and loss of the foetus.

Symptoms of PID include:

Although the evidence is not conclusive, research studies have found high levels of caffeine consumption might prolong how long it takes to get pregnant. Professor Robert Norman, an expert in reproductive medicine at the University of Adelaide, says while the link between caffeine and infertility is weak, women trying to get pregnant should consider cutting out coffee and caffeinated drinks.

The average amount of caffeine in a standard cup of coffee is 85mg, but it can range from 40mg-175mg depending on how the coffee is prepared and the kind of beans used. Consuming more than 500mg of caffeine per day can increase the amount of time it takes to conceive. You need to remember that caffeine is also found in a lot of other products such as cola, tea, dark chocolate and many 'energy' drinks, not just coffee.

Heavy metals such as lead and mercury, and industrial chemicals, can affect a woman's fertility. Repeated exposure may reduce fertility and increase the risk of miscarriage and birth defects.

For more information on the factors that affect fertility visit yourfertility.org.au